Barnhart took home three of seven SC&RA Job of the Year Awards at the SC&RA Annual Conference April 14-18 at the La Costa Resort & Spa in Carlsbad, California. The awards recognize projects that successfully meet professional challenges in rigging and hauling. 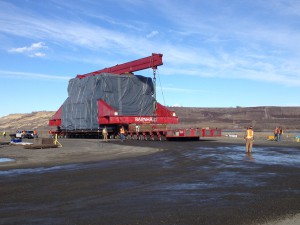 The vault being hauled after removal.

Barnhart engineered and built equipment to lift, transport and set a 340 vault and 309 reactor from the Washington Closure Hanford site in Washington.  The 1000-ton loads then had to be transported 50 miles to the Environmental Restoration Disposal Facility (ERDF).

The challenges were many. Since the 340 Vault was originally a basement for a larger building, the building had to be removed and then extensive excavation was required to allow access to lift the vault as well as transport the vault to surface level.  The highly-radioactive 309 Reactor had to be removed concurrently with its shielding structure as one large monolith.

Engineering for the project began in January of 2012 and the final piece was set at the ERDF in February of 2014. 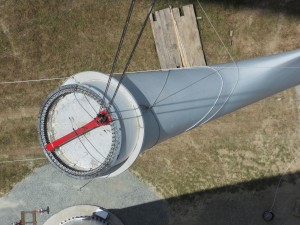 Barnhart removed and replaced a damaged blade on a 2.5MW Clipper C-96 Liberty wind turbine generator utilizing their craneless single blade solution. Ice buildup on the blade posed a challenge, altering the center of gravity of the blade and adding an unknown amount of added weight. To overcome the challenge, Barnhart employed a “steam genie,” or heated pressure washer, to melt the ice and perform the exchange.

Barnhart hauled a 425,000 lb. secondary reformer 1,605 miles from a fabricator in Tulsa, Okla. to a refinery in Lima, Ohio via barge and over-the-road trucking.  Weighing in at 425,000 pounds, the reformer was just over 73-feet-long, 17-feet, 8-inches wide and 18-feet, 4-inches high. In order to accommodate the vessel, Barnhart had to create the largest dolly transporter the company has ever assembled, with a gross weight of 885,000 lbs. 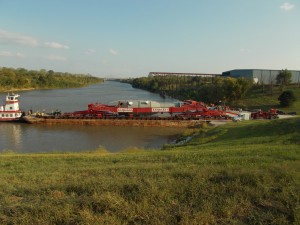 Barnhart decided to roll the entire 300 foot long dolly transporter and vessel directly onto the barge.

The project involved a 13-mile haul from Tulsa to the Port of Catoosa, loading the cargo and dolly onto the barge, and barging 1,357 miles to Burns Harbor, Ind. The barge trip required negotiating the low-lying Lemont Bridge which connects Lake Michigan to the Illinois River.  The final leg of the trip was another 235-mile haul to the final destination.