Posted on December 22, 2016 by Meredith Portman

During World War I on Christmas Day in 1914, British soldiers stationed on the Western Front heard an unusual sound.

German soldiers were singing “Silent Night,” a gesture of goodwill that began an unofficial cessation of hostilities that became known as the Christmas Truce of 1914. British and German soldiers laid down their arms, tentatively emerged from their respective trenches and shared, however briefly, carols, food, camaraderie and games.

What made these men put aside their fears and hostility toward one another? The truce may have been sparked by a proposition from Pope Benedict XV for an official “Truce of God” in which hostilities would cease over the Christmas period. Though widely rejected by military authorities, perhaps a seed had been planted among the soldiers. Encamped in trenches, cold, muddy, weary and longing for loved ones, maybe they hoped to capture a little peace on Christmas. 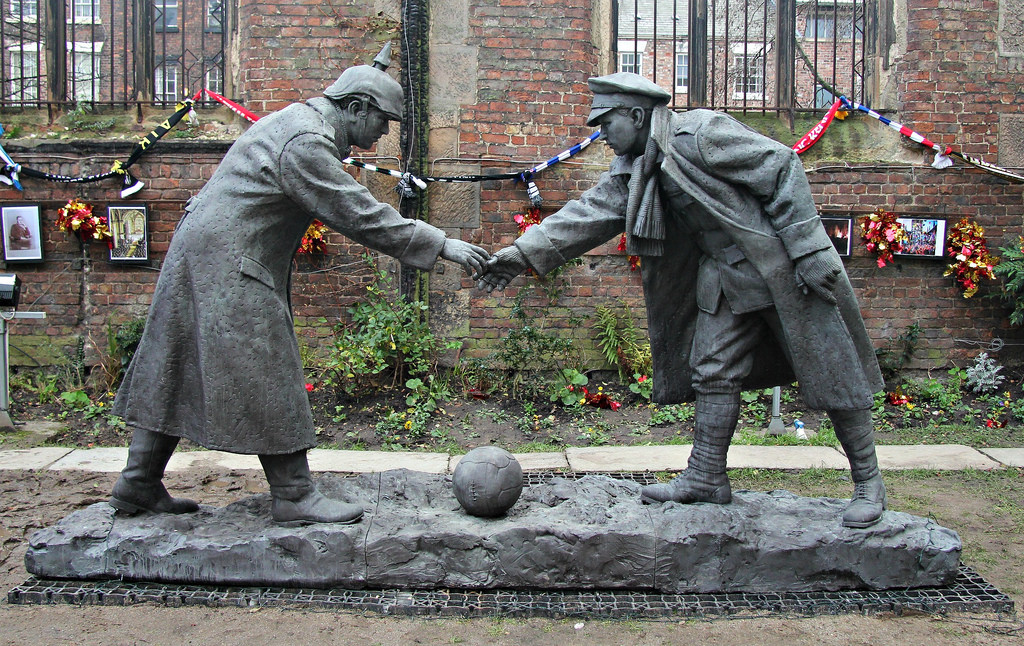 The Christmas Truce statue in Liverpool.

While the precise details of what happened vary, the truce was widely reported by a variety of men who participated in it.

According to Rifleman Oswald Tilley, British troops noticed at dawn the Germans had placed small Christmas trees along parapets of their trenches. Slowly, parties of men from both sides began to venture toward the barbed wire that separated them.

“All down our line of trenches there came to our ears a greeting unique in war.  ‘Come out, English soldier; come out here to us.’  For some little time we were cautious, and did not even answer. But up and down our line one heard the men answering that Christmas greeting from the enemy. How could we resist wishing each other a Merry Christmas, even though we might be at each other’s throats immediately afterwards?”

Not a shot was fired that night.  But the truce was short-lived and the war continued for four more years. Disapproving officers on both sides took strong measures to ensure that it would never happen again.

After a contentious election a month ago, this desire for an end to hostilities seems particularly fitting.  While the conflicts of warring countries certainly can’t be compared to disagreements among political parties, the soldiers’ message of overcoming fear, working to understand one another and celebrating the true spirit of Christmas resonates more than a century later.

Meredith Portman is a freelance writer who specializes in heavy industry, healthcare and education.
View all posts by Meredith Portman →
This entry was posted in Uncategorized and tagged Christmas Truce. Bookmark the permalink.