ATTENTION TO DETAIL TILL THE JOB IS COMPLETE

No matter what your college loyalties might be, if you’re a football fan, you were likely mesmerized by the Iron Bowl last weekend.

This annual clash of football titans Alabama and Auburn is one the biggest rivalries in sports.  But at number one and number four, they were also two of the best teams in the country.  Plus, Auburn’s Phoenix-like rise from a 3-9 record in 2012 and a 49-0 drubbing in last year’s Iron Bowl to a 10-1 record entering this year’s Iron Bowl added to the drama.  Throw in their “Immaculate Deflection”against Georgia a few weeks ago and Auburn had the best comeback story of 2012.

Still, no one expected them to beat recent three-time national champion Alabama.  Not Lee Corso.  Or Kirk Herstreit.  Or Paul Finebaum.

The dramatic ending is so legendary it hardly bears repeating, but here we go.  After Alabama coach Nick Saban fought to have one second put back on the clock in regulation, the Tide decided to go for a field goal.  Since Alabama had already missed four field goals, Auburn coach Gus Malzahn positioned cornerback Chris Davis by the goal posts just in case the kick fell short.  Freshman kicker Adam Griffith’s 57 yard attempt fell short, Davis caught the ball, and sprinted more than 100 yards for a score with no time remaining on the clock. 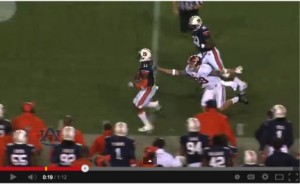 A return of a missed field goal is one of the most rare of all football plays. In fact, it had only happened three times before last Saturday according to NCAA records, twice as far back as the 1960s.  So for Saban to have not anticipated this possibility –  was it a calculated move based on statistics, or a lapse in his famed “Process” which focuses on all the steps to success.

For Barnhart, this oversight highlights the importance of completing a job all the way through and having attention to detail till the very last second, through the very last action item.

Our core values, particularly when it comes to quality service and innovation, when followed properly, will lead to doing a job right so there are no surprises, particularly for our customers…till the last tick of the clock.