BARNHART EFFICIENCY AT WORK IN KENTUCKY

Barnhart’s new team in the Ohio Valley is in the middle of a major project for a chemical plant in Calvert City, Kentucky.  The team was hired to offload, move and set three chemical columns weighing up to 200,000 lbs. each with a height of up to 170 feet tall.  The timeframe for the project was tight, so planning and preparation were key to the project’s success. 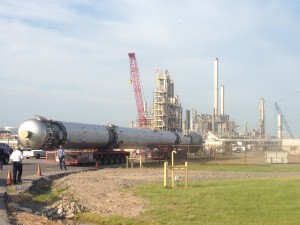 trailers horizontally.  Barnhart’s engineers used gantries and Goldhofers to offload the columns and move them it into the plant reducing the need for large crawler cranes. The team used two legs of gantry to tail one of the vessels and set them on stands so the plant could insulate the columns before Barnhart placed them in a vertical position.

The largest vessel proved to be the biggest challenge as it gave the tailing crane almost 80% of the load. The team had to place the crane just right to take the load and still have the capacity to bring the vessel upright.  Proper placement of the crane was critical.  With the plan in place, and an engineer on site to verify dimensions and procedures were met, the team executed the work as planned. 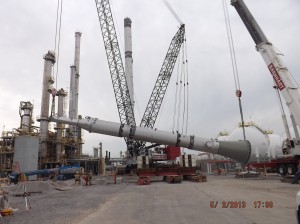 The customer’s original schedule provided two weeks for the setting of the two largest columns.  But through innovative planning that allowed the on-site heavy lift crane time to install the platforms and ladders originally planned with another crane, Barnhart set them in one day!

According to Clay Ellis, branch manager of Barnhart’s Owensboro office,“The job was well planned out and our project manager found ways to maximize the use of our men, 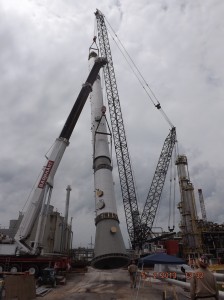 equipment and job site conditions.  It was a long day, but sometimes when preparation meets opportunity you just get lucky.”

Barnhart’s upfront engineering, attention to detail, and proven safety record gave the plant the confidence to maintain operational status during even the biggest lifts.

The team is slated to install the final vessel in early July.