A mammoth project is underway in Seattle to replace the Alaska Way Viaduct with a new State Route 99.   To dig the tunnel that goes beneath the city, the contractor brought in the world’s largest Tunnel Boring Machine (TBM) ever built, nicknamed “Bertha”, and enlisted Barnhart for what has become one of their largest lifts ever.

In early April, Bertha, named after a former Seattle mayor, arrived at the Port of Seattle after a two-week, 5,000 mile journey from the Hitachi Zosen manufacturing plant in Osaka, Japan. The $80 million machine had been taken apart into 41 pieces for transport, the largest weighing about 850 tons.

Bertha was met at the port by Barnhart and the 41 pieces, along with hundreds of other smaller tools and equipment, were offloaded onto Goldhofer trailers in a 24-line quad wide configuration. 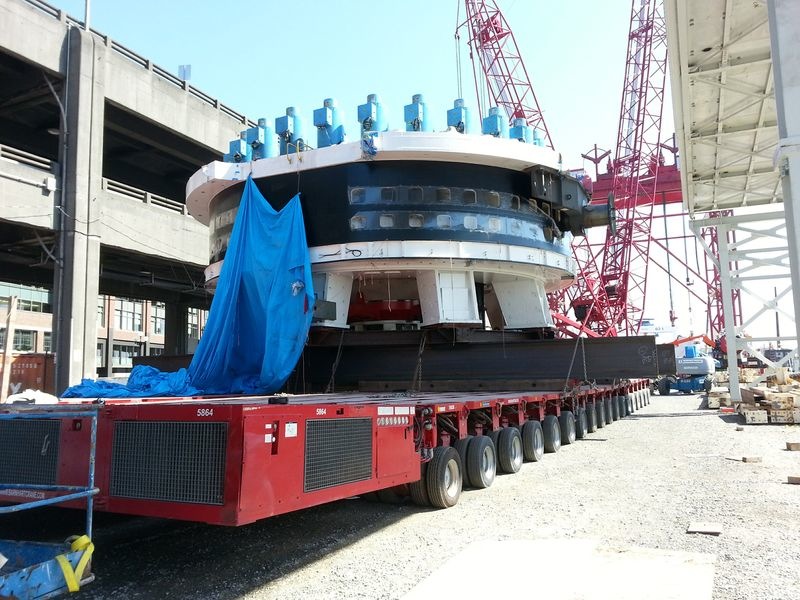 Click photo to see week one of the project.

From there, Barnhart transported the major components through the TTI terminal about 500 yards to the launch pit site over nine days with teams working round-the-clock. In addition to the cumbersome nature of moving the large pieces, the team had to work around regular port activities.

Once at the site, each of the large TBM components was staged on site on pipe stands and staging beams.  The challenge – each item had to be staged in the correct sequence so they’d be in the right order when they were lowered into the launch pit for reassembly, 80 feet below the surface.  When reassembled, Bertha will be five-stories tall and 57’ in diameter. 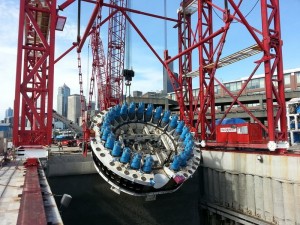 “With a job this big, safety is always a challenge,” said Barnhart Project Manager Phillip Powell. “There is zero margin for error. This job was absolutely perfect.”

Bertha is owned by Seattle Tunnel Partners, the Washington State Department of Transportation’s contractor for the tunnel project.  Juan Luis Magro, the company’s lead construction manager said of the project, “Barnhart has performed an engineering marvel.”

The component-setting phase should be complete this week,  but this may not be the last Barnhart sees of Bertha.  We are bidding on dismantling and removing the machine when the tunnel job is complete in 2015.