BARNHART PLAYS A PART IN COLLEGE FOOTBALL SPECTACLE ON SATURDAY

Posted on September 7, 2016 by Meredith Portman

When the Virginia Tech Hokies take the field against the University of Tennessee Volunteers in the Pilot Flying J Battle of Bristol this Saturday, Sept. 10, in Bristol, Tenn., several records are likely to be shattered.

The game, which will be featured on ESPN’s College Game Day, takes place at the 150,000-seat Bristol Motor Speedway, and is expected to break attendance records for a college football game. According to the Guinness Book of World Records, the record stands at 115,109. The event will also make history as the audience will watch the game, replays and highlights on the world’s largest TV. 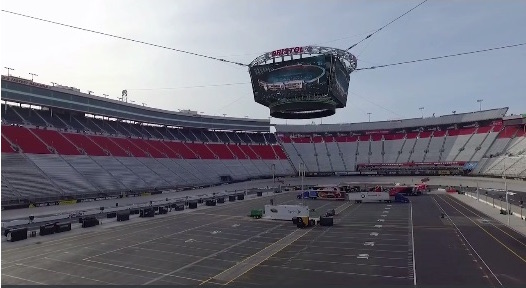 Barnhart installs the gondola on the Colossus.

Nicknamed “Colossus,” the display was installed by Barnhart between January and April of this year as covered in two videos on our website that detail the process and in an April blog. Colossus is composed of four custom-built screens, each approximately 30 feet tall by 63 feet wide. The screens hang from a halo-shaped truss and cage, with an additional circular LED display screen underneath. Colossus is the world’s largest outdoor, permanent, four-sided, center-hung video display and weighs 127 tons.  The entire system, which includes the support towers and cables, weighs in at 700 tons.

The installation of the mammoth display required careful engineering and surgical precision. Barnhart was hired by the general contractor for the job due to the company’s experience and expertise in engineering, lifting and setting difficult and large projects.

For Barnhart project manager Tommy Thomasson the project was a “triumph of engineering. Outstanding engineering and execution made this project a success.”

Memphis-based Barnhart isn’t really saying which team they are pulling for in this matchup, but you can probably guess. But whatever side you take, if you’re in the audience at the Battle of Bristol, you’re certain to get a great view of the game.