Barnhart played an essential part in a recent milestone for The Port of Monroe on Lake Erie in Michigan. In July, the busy port received its first European cargo since the 1960’s, and Barnhart was there to unload it.

After a two-week journey from Bremen, Germany, a cargo of windmill blades and 127 sections of 40-foot long pipes arrived on the 411-footlong Faglegracht, a Spliethoff Lines container vessel. While it would seem unusual to choose a comparatively small port like Monroe, the intimate nature of the port proved beneficial in the complex exchange that involved six companies, including Barnhart. 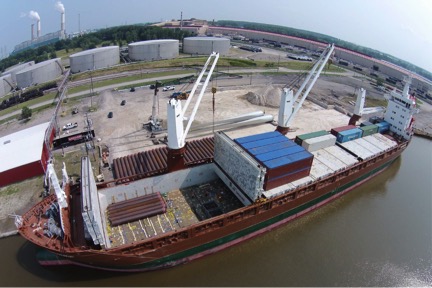 Barnhart’s role in the job involved unloading two blades, which, at 190 feet long, were the longest ever used in Michigan.  The company also handled 120 sections of pipe.

The blades were unloaded using the ship’s gear with Barnhart providing specialized rigging.  A Terex 75 ton rough terrain crane and 40k forklift were also utilized to load the blades onto a truck the following week.  The total time to unload blades and pipe was 12 hours.

There was limited dock space, which caused Barnhart to stack the pipe four rows high.  While the coordination of the six companies – which included the port, ship, tug boat, freight forwarder, and blade truck transport company – was a challenge, the project was completely successfully.

“I think the Port of Monroe has not necessarily been seen as a potential gateway to international trade in recent years, but this is proof that our capabilities are far-reaching,” said Port of Monroe Director Paul C. LaMarre III. 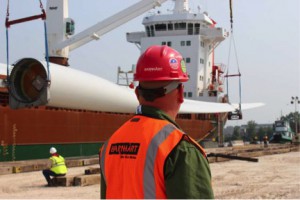 Barnhart’s Monroe Branch Manager Dean Montrief added, “As a result of the work we performed, we expect the shipping company to make regular stops at the Port of Monroe.”

Meredith Portman is a freelance writer who specializes in heavy industry, healthcare and education.
View all posts by Meredith Portman →
This entry was posted in Project Cargo Logistics and tagged Barnhart, Port of Monroe, rough terrain crane, Specialized Rigging. Bookmark the permalink.