A Catholic church in Utica, Nebraska had been missing its steeple for many years, seventy to be exact. Back in 1949, the steeple at St. Patrick’s Church had been struck by lightning and consumed by flames. In the following decades, it was never replaced.

Thanks to the efforts of an anonymous donor and church pledges, a new copper steeple made its way to its permanent home in Utica this week. Barnhart played a critical role in restoring the steeple to its former glory. 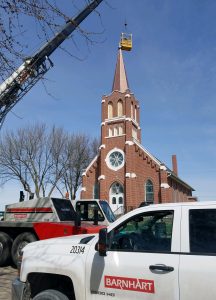 The church needed a company capable of lifting and setting the 30-foot tall steeple. It also weighed 23,000 pounds, even though the copper-clad steeple was hollow. Barnhart’s Lincoln office stepped in and donated its services.

“With the tragic news of Notre Dame’s burning in Paris and the three churches lost to fire in Louisiana, this project happening during Holy Week is very meaningful,” said Barnhart’s Director of Marketing Chris Teague. “The fact that someone donated the steeple and the parishioners raised the money to renovate the bell tower sets a good example for us all. The least we could do was to donate our services to help restore the steeple in time for Easter.”

On April 13, Barnhart used a 100-ton mobile crane to lift the steeple and place it atop the bell tower. According to the local newspaper, The Seward Independent, the historic moment was witnessed by a delighted crowd of 25 people and two dogs.