BRIDGE A MILESTONE FOR BARNHART

Posted on September 8, 2015 by Meredith Portman

Last week, Barnhart placed a 60-ton, 300-foot pedestrian bridge – the largest bridge of its type the company has ever handled – on support piers in a 14-acre park in Meriden, Connecticut.

Crews had been building the bridge abutments for weeks in preparation for the lift. The bridge arrived in five pieces on several oversized trucks from a fabricator in Alabama. 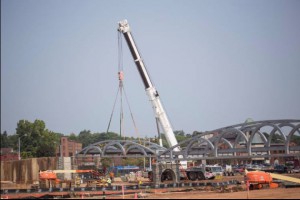 Barnhart pieced together three of the sections to create the center part of the bridge. They moved the crane and set the fourth and fifth sections, which comprised the ends of the bridge.

The lift plan was worked out a month in advance to ensure safety procedures were followed in the building and lifting of the bridge.

“As far as pedestrian bridges go, this one is the largest that we’ve put together that’s a single stand bridge,” said Al Oulette, sales representative and former crane operator at Marino Crane, a Barnhart Crane company.   “It was quite a job.”

Meredith Portman is a freelance writer who specializes in heavy industry, healthcare and education.
View all posts by Meredith Portman →
This entry was posted in Heavy Civil Construction and tagged Barnhart, heavy lift, Heavy Lift Cranes. Bookmark the permalink.