CREATIVITY KEY TO JOB OF THE YEAR AWARDS FOR BARNHART

Barnhart was honored with two “Job of the Year” awards in the categories of “Rigging Job $750,000 – $2 Million” and “Rigging Job Under $150,000,” at the recent Specialized Crane and Rigging Association (SC&RA) annual conference

Criteria for the awards included overall safety, ingenuity, planning and scheduling. The winning jobs represented those that successfully overcame project challenges in the safest and most creative ways.

In the “Rigging Job $750,000 – $2 Million,” Barnhart engineered and built equipment to transport, lift and install a 400,000-lb. package boiler into a paper mill. The challenges were numerous due to restricted access, clearance challenges and the boiler’s offset center of gravity. 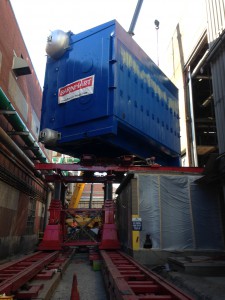 The boiler is maneuvered through the wall opening.

Barnhart’s engineering team designed a custom bracket to pin the boiler’s jacking haunches, allowing the use of a chain hoist to level the boiler during the transload.  At the site, the boiler had to travel down a narrow alley to an elevated wall opening. The boiler was lifted by gantries, rotated on a turntable and slid into the building on a slide system, with only a few inches clearance on all sides.

Due to the offset center of gravity, it was possible to support the boiler from three locations, which provided the room needed to remove Barnhart’s equipment. The boiler was lined up above the sole plates of the supports to ensure the boiler was fully supported, after which the crews removed the slide beams.

The winning “Rigging Job Under $150,000” included the removal and replacement of a motor, gear box and compressor located inside a structure full of piping and electrical work. Removal by crane was not an option due to overhead structures and utilities. 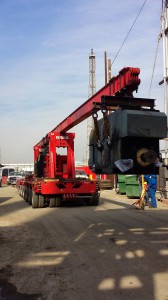 The Joust in action.

Barnhart developed a new traveling and lifting machine especially for the job dubbed, “The Joust” which consisted of two gantries on a six-line self-propelled motor transport and a cantilever beam. Barnhart’s engineering team provided stability calculations to ensure the center of gravity of the beam would remain safely between the two gantries.

Barnhart utilized a modular structural box beam with a 40,000-lb. counterweight.  A custom center point lifting beam was designed to account for the lifting points on the compressor and the minimal headroom.

Meredith Portman is a freelance writer who specializes in heavy industry, healthcare and education.
View all posts by Meredith Portman →
This entry was posted in Awards, Featured and tagged Barnhart, cantilever beam, gantries, SCRA Job of the Year, Slide System, Specialized Rigging, turntable. Bookmark the permalink.