DETAILED PLANNING RESULTS IN JOB OF THE YEAR AWARD

Faced with clearances of less than two inches, Barnhart pulled off a rigging challenge that resulted in a 2018 SC&RA award in the category of “Rigging Job of the Year Under $150,000.”  Barnhart has received Job of the Year recognition almost every year over the past decade. 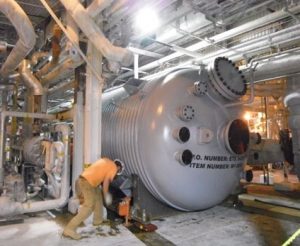 Barnhart was hired to install a 46,000 pound silicon reactor at a chemical company while the plant was in operation. Measuring 11 feet 5.5 inches in diameter and 18 feet l1 inches in height, the reactor’s path to its final location was incredibly tight with vertical and horizontal clearance challenges.

Installation options included removing the roof, but that would have resulted in a plant outage. However, a computer model revealed that a path through the facility was possible – but just barely – with many immovable obstructions. The path would ultimately snake through the plant and up a vertical shaft for securement on the second floor.

The reactor had to negotiate a couple of tight right-hand turns, one which offered as little as 1.8” to spare between columns. Barnhart’s solution was to modify the shipping frame to lower the overall height to be able to use traditional rigging tools. Roller support frames were added outboard from saddle to saddle, which didn’t add to the overall height or width of the reactor.

Horizontal travel was accomplished with a forklift with the reactor supported by Hillman rollers on the roller supports that were attached to the saddles. Spotters were located at every critical juncture.

Once the reactor negotiated the turns and reached the erection area, the reactor had to be tailed to vertical and hoisted to its final set location with just three inches of clearance. The team utilized standard chain hoists to lift vertically as high as possible, using the Barnhart-designed low-profile hoist system.

But the reactor was not designed to be lifted from the bottom. Anticipating this issue, Barnhart had collaborated with the reactor manufacturer to develop a jacking frame that could be partially disassembled during tailing and then reinstalled for jacking operations.

A jackup tower, which fit under the reactor by just two inches, then took the load. The hoist system was removed so the reactor could be pushed up vertically from underneath to its final set location.

At final elevation, Barnhart installed the support steel and the reactor was lowered and secured. The jackup frame was removed and Barnhart demobilized – beating the proposed installation schedule by 50 percent.