At a recent project at a heavy industrial site outside of Austin, Barnhart’s engineers did what they do best, finding a safe and cost-effective solution for their customers.

Barnhart was hired to remove and reinstall three large generators. The customer’s original plan included taking down a wall to remove the generators, the largest of which measured 17′ x 15′ x 15′ and weighed 171,000 lbs. Barnhart engineers saved the customer both time and money by developing an alternative that utilized the customer’s overhead gantry to situate three of Barnhart’s One-Shot 500-ton gantries to lift the generators, making removal of the wall unnecessary. 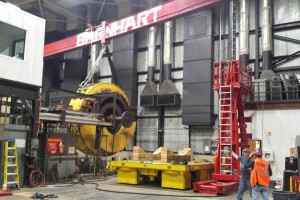 Once the gantries were in place, Barnhart made use of a single girder beam system to lift and slide each of the three generators to a trailer provided by the customer. In removing the largest of the three generators, Barnhart was working at 98% of the 72-foot track girder’s capacity and included design features to mitigate the risk, completing the job quickly, effectively and safely, according to Barnhart Project Manager Chris Hughes.

“The reinstall phase required precision in setting the generators,” Hughes said. “We used the 200-ton swivel off a 200-ton hoist to swing the generators around a corner and a set of wires. That was an extremely effective effort.”

Barnhart was required to reinstall only two of the three generators, a process that was completed in a day and a half.