End of an Era? 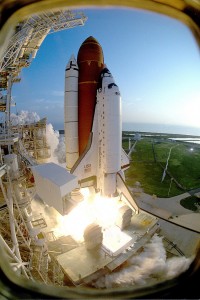 The Space Shuttle Discovery landed in Washington, DC yesterday in preparation for going on display at the Smithsonian’s National Air and Space Museum.  It is a big deal for guys like me who were moved to consider engineering as a result of seeing the Shuttle program as a twelve year old lad.  I watched a launch for the first time and thought “Whatever the job is that thinks about stuff like that, that is what I want to do.”  As it turns out, my thoughts were not unusual.  The generations of engineers before me were moved to study because of the race to space in the 50’s or the Gemini and Apollo programs of the 60’s.  My guess is that the next vehicle will motivate many more to consider engineering as a profession.

I will travel to DC soon and I will think about the job of moving the Shuttle into the display area because that’s what I do.  I work for a company who moves really big things.  Over my twelve year career with Barnhart, I have participated in many moves including a project at Kennedy Space Center working on the launch facility (Pad 39-A to be exact, where many-a-shuttle-mission began) lifting the Rotating Service Structure (RSS) weighing in at 10 million pounds.  I got to fulfill many boyhood dreams on that job:  I visited the Vehicle Assembly Building; watched the traveling city (The Multi-Launch Platform that carries the Shuttle to the launch pad); I got to touch the “skin” of the aircraft recognizing for the first time that the outer skin is a textile material; I touched the famous ceramic plates that make re-entry possible; I sat in the room where the astronauts enter the Shuttle.  I enjoyed every minute.

I am an engineer who now works with people.  And no business plan, no mission statement, no set of core values can be carried out without people who see their purpose in working together.  Seeing the Discovery in DC will be an interesting moment in my own journey.  The Shuttle program moved me as a boy.  Now, I want to move people to do hard work each day for good rewards now and in the days to come.  Not much has changed really.