Gate Removal Project Goes Off Without a Hitch

Barnhart recently performed a project at the Armistead I. Selden Lock and Dam on the Black Warrior River to provide the lifting systems for removing and replacing two 60-year-old downstream miter gates. The gates were 61’ wide x 46’ tall and weighed 426,000 lbs.

The work was performed using a modular lift tower and a girder system in conjunction with a 500-ton hoist and slide system. Barnhart used a 300-ton crane with superlift to assemble the girder system. 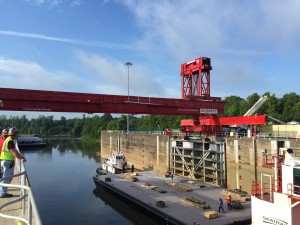 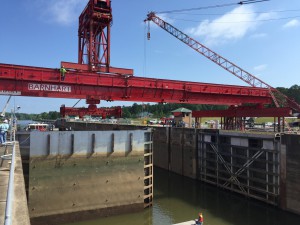 The girder spanned the width of the lock, which was 150’ long. The gates were suspended from an adjustable rigging system and an adjustable spread bar attached to a hoist. 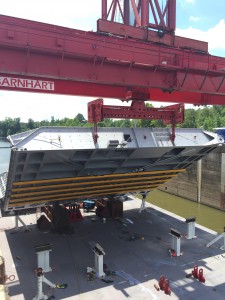 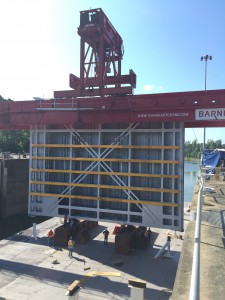 The gates were removed from the pocket using the hoist and downended onto barges for transport. The new gates were delivered to the hook of the hoist by barge and upended using a 500-ton hoist. Tugs were used to support the lower end of the gate while they were upended and downended on barges. The slide system helped slide the gates back into the pocket.

While Barnhart’s part of the project only took four days, the 30-day timeframe was a challenge. Being a water-based operation, the project required coordination between Barnhart, the tug and barge company, the Corps of Engineers and the maintenance company.

Still, according to Project Manager Scott McDonald, “This was a group effort between five different entities.  Everything went off without a hitch.”