An ambitious hauling project was big news in Tennessee in August.  Barnhart was involved in transporting a mammoth absorption column, 14 feet in diameter and 140 feet long, from Knoxville to the U.S. Nitrogen plant site in Greenville, Tenn.

The project started in 2012 in Lake Charles, La. where the 330,000 lb. column was loaded to a barge and transported to a terminal in Knoxville.  There, Barnhart did a roll-off using a THP trailer configuration.   The column was offloaded with gantries.

Then the column sat in the terminal for a year, while the necessary plans were made to safely transport it to the plant site.

For Barnhart, it took six months of planning to navigate the 62-mile route which required crossing two interstates and traveling through five counties and several municipalities.   The team had to work with various authorities, including the Tennessee Department of Transportation, utility, cable and telephone companies, law enforcement in eight jurisdictions, and the counties and municipalities where the load would travel through.

Once all the plans were in place, Barnhart rolled the  vessel at the terminal using tank rollers.   The column was loaded onto the transport truck with gantries.

The transportation and rigging was 16 feet wide and 175 feet long and took up two lanes. 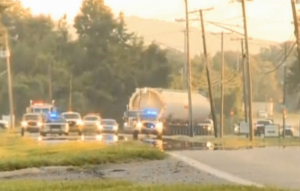 The hauling rig, trucks and vessel had a combined weight of 256 tons.

A key piece of equipment in the transport was a dual lane trailer which could span multiple lanes and distribute the load evenly, particularly when going across bridges.

It was a two-night haul, as the vessel could only move between 7 pm and 5 am. at a maximum speed of 25 miles per hour.  Power crews traveled with the haul to ensure safe passage under the overhead power lines and traffic lights, and eventually raised approximately 50 lines.

The sight of such a large vessel drew an audience.  Many onlookers watched the column as it came through their town.

Once the column reached its destination, it was offloaded at the site using four legs of gantry and rolled back to its lifting configuration. The column was lifted to vertical and set onto its foundation using two legs of gantry and a 300 ton crane, instantly becoming the tallest structure in Greene County, Tennessee. The crane alone was brought to the site in 26 tractor-trailer loads.

After more than a year of work, it only took an hour to set the column into place.