Posted on February 19, 2014 by Meredith Portman

Barnhart prides itself on keeping jobs on schedule, but sometimes Mother Nature trumps all our careful planning.

The project started in December at the Port of Catoosa in Oklahoma and would end at the Port of Toledo in Ohio. Barnhart loaded the drum into a hopper barge to be transported by the river system to Chicago.  The low profile barge was required in order to pass under one of the bridges along the route.  But since it could only be used for inland waterway transportation, the cargo would have to be transferred to another barge to complete its journey. 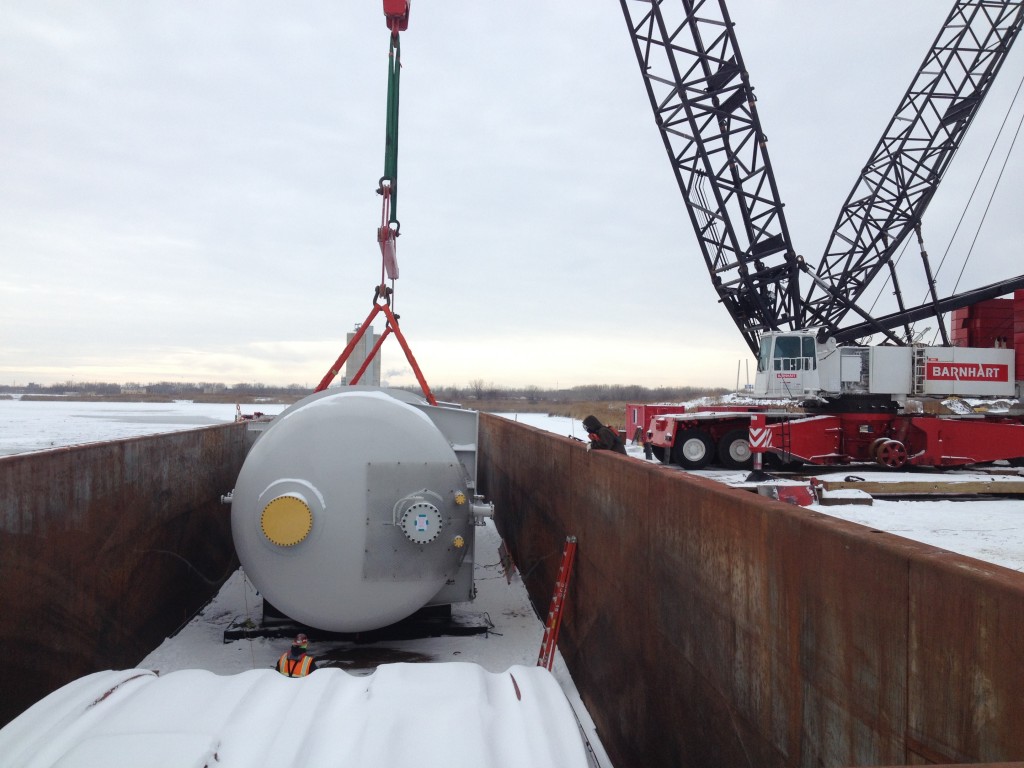 Barnhart loads the KO drum onto the hopper barge.

The barge got to Chicago on New Year’s Day.  The KO drum was offloaded and loaded onto an ABS certified Barnhart deck barge for transport to Toledo with a 550 ton DeMag TC 3000 lattice boom crane.  That’s where the plan hit a snag.

The barge was accompanied by two commercial tugs, but once it reached the Straits of Mackinac, the narrow waterway that connects Lake Michigan and Lake Huron, it was stopped by ice.  The straits and parts of the lakes were frozen solid due to the extreme temperatures produced by the polar vortex. 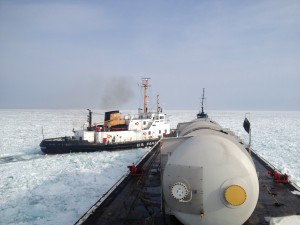 A Coast Guard ice cutter clears the way for the deck barge carrying the KO drum.

To keep shipping channels open, the Coast Guard had brought in ice cutters, heavy ships with thick, reinforced hulls and polar ice-breaking bows.  The ice cutters clear a track in the ice, which can be up to a foot thick, and escort a ship through the passageway.  Ships have to be scheduled, and communication and timing are essential because the track closes and freezes up quickly after the ice cutter goes through.

It was a new experience for veteran Barnhart project manager Dan Webb. “This was the first time we’ve had to use ice cutters.  It was challenging because it required a lot of coordination with the Coast Guard. We were not the only ship, so we had to wait our turn.” Communication with the client was also important as BP was kept apprised of the status of the project.

While the delay added a significant amount of time to the original schedule, the barge was escorted through the ice and safely reached the Port of Toledo on January 19. 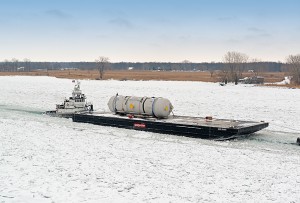 The Coast Guard escorts the barge through the track.

Meredith Portman is a freelance writer who specializes in heavy industry, healthcare and education.
View all posts by Meredith Portman →
This entry was posted in Refinery and tagged Barnhart Crane, BP, Heavy Lift Cranes, KO Drum, Refinery. Bookmark the permalink.