Barnhart was hired to devise an innovative lift system for a rigging project at a nuclear plant in Louisiana. The process was outlined in a recent article in Cranes Today.

One of the plant’s two 35-year-old clarifiers was taken offline because several of its 16 lateral supports were damaged from normal use. This compromised the structural stability of the 600,000 lbs. clarifier, creating an overhead fall hazard which prohibited anyone from being allowed inside the unit. The clarifier had to be supported from above to allow for the safe removal of the supports. 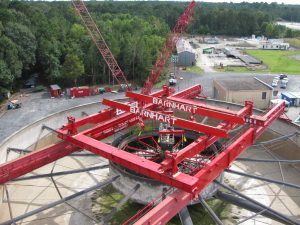 Barnhart designed a rigging system that spanned the 178’ inside diameter tank utilizing both a heavy lift crawler crane and a telescoping hydraulic crane to assemble the lift system. The backbone of this system featured Barnhart’s 8’ girder sections that were connected on the ground for a total length of 180’. Once assembled, these girders, weighing up to 225,000 lbs., were set to the clarifier walls with tandem lifts.

Barnhart custom fabricated stability kickers for the 8’ girders on the wall, deflection load spreading rockers for the girder contact points, and various spreader bars to accommodate the complicated rigging design challenges. With all the rigging in place, the clarifier was lifted and held in place.

With the clarifier safely supported, Barnhart positioned pull-up gantries and 5’ girders underneath. The overhead girder and lift system was disassembled and removed so that the replacement of the supports could proceed. Once this process is completed, the gantries and girders will be removed, allowing the clarifier to go back online.