When you specialize in crane and rigging services, you often encounter unusual challenges, many in mid-air.  That was the case with a project Barnhart Crane and Rigging completed last spring which recently received SC&RA’s Rigging Job of the Year, under $150,000, 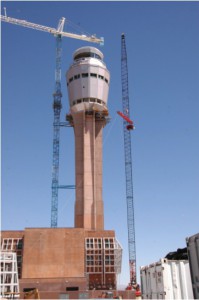 A new 352-feet high tower with an air traffic control cab was being constructed at Las Vegas’ McCarran International Airport. The general contractor temporarily installed 10 working platforms, each weighing 12,000 pounds, to install the cab.  Once it was in place, it was discovered that the cab’s outermost diameter overhung the walls by 18 feet, so the platforms could not be removed with the tower crane.   And did we mention they were 230 feet in the air?

The contractor turned to Barnhart for a solution. We then turned to a unique weapon in our arsenal, the tip stick, which could also function as a cantilever. As the name would suggest, it is designed to tip and maneuver around obstacles like the tower facade.

The team developed a new and innovative use for the cantilever system by installing lifting eyes on the tip stick’s control pump and rigging it to the tip stick.  This served two purposes:  to ensure unobstructed visibility for the operator and to function as a counter weight. Pump controls were then modified so it could be operated with remote control.

Safety proved to be a factor. As the project was 230 feet in the air, fall safety was a natural concern.  To mitigate the dangers of the brisk Las Vegas winds, Barnhart implemented a stop work policy if gusts were over 20 mph.  Furthermore, adjacent to the tower was a live taxiway, so lifts had to be timed to ensure that there wasn’t a plane on the taxiway in case something should go wrong.

Rigging was a challenge because it wasn’t possible to get the tip stick directly above the center of gravity (CG) of the platforms.  A moment-resistant hard connection was designed which would allow the platform to be picked even if we couldn’t get the CG below the beam. 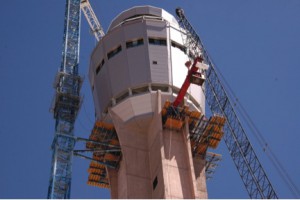 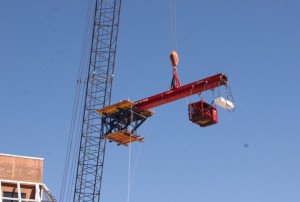 The platforms were successfully removed and the job was completed in less than five working days with no safety incidents.  It resulted in our 26th SC&RA Job of the Year award.