Job of the Year: Innovation and Custom Fabrication

Barnhart recently took home an SC&RA (Specialized Carriers & Rigging Association) Rigging Job of the Year award in the $750,000 to $2 million category. The company also received an award in the Under $150,000 category as well.

The winning project took place at a nuclear plant in Louisiana. One of the facility’s two clarifier units needed repair. But the unit sat inside a concrete structure with a wall height of 28 feet and an inside diameter of 178 feet.

The clarifier core was supported by 16 lateral supports, ten out of which were structurally compromised and needed to be replaced. This made access from inside the unit too unsafe. 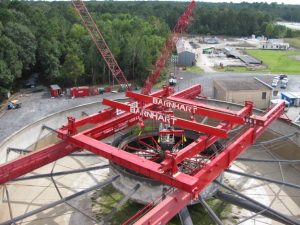 Barnhart had to design a lift system from above that would span the diameter of the tank and support the 600,000 lbs. clarifier while the lateral supports were removed. This required some innovative engineering.

Utilizing both a heavy lift crawler crane and a telescoping hydraulic crane, Barnhart assembled the lift system. The backbone of this system was 8 foot girder sections that were connected on the ground to a total length of 180 feet. Once assembled, these girders, weighing up to 225,000 lbs., were set to the clarifier walls with tandem lifts. 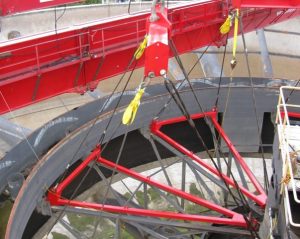 Barnhart custom fabricated stability kickers for the girders, deflection load spreading rockers for the girder contact points, and various spreader bars to accommodate the complicated rigging design challenges. With all the rigging in place, the clarifier was lifted and held in place while the lateral supports were removed.

Barnhart then positioned pull-up gantries and 5 foot girders to support the clarifier from below. Once the new lateral supports were in place and connected, the gantries and girders were removed.