When the National Civil Rights Museum in Memphis started a major renovation in November 2012, they were looking for a company that had experience moving sculptures and fragile and delicate items.

They turned to Barnhart because we not only successfully moved several 3,000 lb. Fernando Botero sculptures at the Memphis Brooks Museum of Art, we were also located in their own back yard.

The items we were asked to relocate were not necessarily delicate, but they were invaluable in terms of their significance in civil rights history. One was a 12,000 pound 60’s era garbage truck representing the sanitation workers strike in Memphis in 1968.  This was a pivotal event that drew Martin Luther King to the city in support of the strike where he was assassinated. 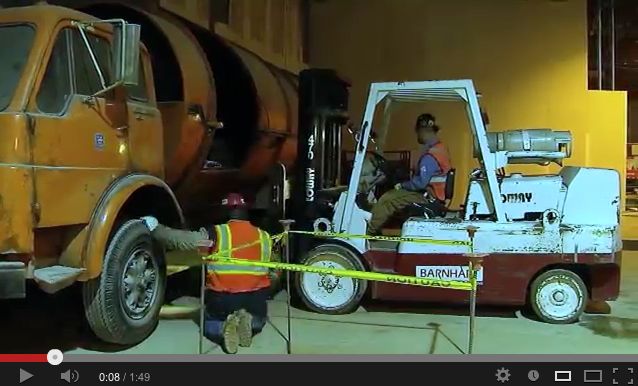 This video shows the Barnhart team repositioning the truck inside the museum and relocating it to its final resting place on the mezzanine.  We welded a steel frame to support the truck and used a 22,000 lb. capacity forklift with fork extensions to lift it to the second level.

The other items Barnhart moved were two buses, one of which was made famous by Rosa Parks when she refused to give up her seat.  Renovations to the National Civil Rights Museum will be completed in early 2014.