It’s been a harrowing week for the eastern seaboard and the city of New York has had particular challenges.  Not only were they facing “Frankenstorm” which swept into the New Jersey shore on Monday night, but another nightmarish scenario that unfolded earlier that day on 57th street.

At approximately, 2:35 pm, the arm of a high-rise crane perched atop One57 Street, a 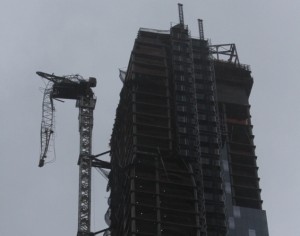 90-story skyscraper under construction, was “ lifted and flipped” over the cab from wind gusts of up to 60 mph from approaching Hurricane Sandy.  The sight of a collapsed crane arm, dangling 1000 feet above 57th Street, added to the anxiety of a city already bracing for a hurricane.

According to an article in Cranes Today by Tim Watson, “Wind forces are particularly important when considering tower cranes, as they are generally erected for periods of months on construction sites and must therefore withstand any wind that may blow during this time. To do this, when out of service, the crane is allowed to free slew with the slew brake held off mechanically, allowing the crane to weathervane and present the minimum area to the wind…”

However, somehow a “double gust” of wind twisted the crane completely backward, an official with the company said, so the crane could not “weathervane”.

According to New York City Mayor Michael Bloomberg, the main body of the crane seemed secure, as did the main cab.  But the dangling crane arm remains a threat so safety measures were enacted.   Nearby buildings were evacuated, steam pipes beneath the streets below shut down, the electricity was turned off, and seven square blocks around the building were cordoned off and closed to pedestrians and traffic.

While the construction company’s structural engineers and the New York City Department of Buildings investigate ways to secure the boom at least on a temporary basis, for a city now coping with flooding and power outages from Hurricane Sandy, it’s a nightmare indeed.

Over the weekend of November 2nd,  in  a delicate, two-day operation, construction workers were able to tether and brace the swaying boom of the crane.  By the end of the weekend, the streets and buildings around the West 57th Street construction site had reopened.  Read how they tethered the boom in The Wall Street Journal.