DID SOMEONE ORDER AN INSTANT BRIDGE?

The New York Times ran an article last week, profiling the replacement of a span of the River Street Bridge in Boston. What was remarkable about the project is that instead of taking two years, the replacement took place over a weekend.

The project was part of the Massachusetts Department of Transportation’s (MassDOT) Accelerated Bridge Program, designed to avoid months and years of driver detours while repair work takes place. Techniques for speeding bridge work have been utilized across the country.  But, according to the article, none of the techniques is quite as “eye-popping as heavy lift, when a hunk of bridge is simply picked up and put into place.”

That’s where Barnhart Crane comes in.  That “eye-popping” part. 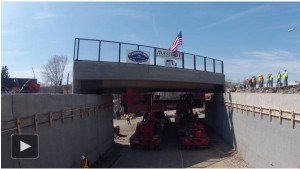 The span of the bridge that needed to be replaced stretched over railroad tracks and was used regularly by freight and commuter trains. In order to minimize rail downtime, workers began building the new bridge superstructure on an adjacent lot last year.

Once it was completed, the project moved quickly. On a Friday, MassDOT shut down the rail line and leveled the track area with gravel and covered the tracks with sheets of plywood and steel to accommodate our trailers. That night, heavy machinery tore out the old bridge.  Then it was Barnhart’s turn. 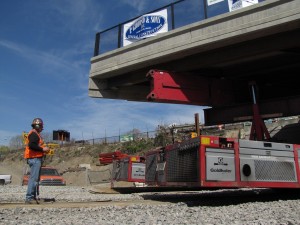 Using a Goldhofer platform trailer, our team was charged with moving the 400-ton bridge into place. You can see the team in action in this video.  One of our employees, Ed Stuczko, was described as operating the trailer’s big yellow controller “like a virtuoso.”

By Sunday afternoon, everything was in place.  By the next night, traffic had begun to cross the new span.