A Barnhart project in California involving 40 components and 50 lifts has received a 2019 Specialized Carriers & Rigging Association (SC&RA) Rigging Job of the Year award.

The award, our 37th since 1992, was in the category of Rigging over $2 Million. It was one of two SC&RA awards Barnhart received this year, adding to a Hauling Job of the Year award.

The winning project started at the Port of Long Beach where Barnhart was hired to receive and transport over 40 press components ranging up to 740,000 pounds from the port to a steel forging plant. 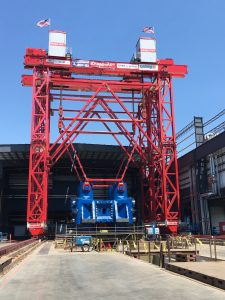 Over the course of a year, the components were transported by dual lane trailer and suspension girders to the site. The project required over six different trailer configurations, which was accomplished by the modular flexibility of the trailer. The hydraulic trailer also allowed the equipment to be self loaded by Barnhart at the port. The cargo also included several large asymmetrical pieces, which were positioned as needed in the suspension girders.

At the site, the components were transloaded to a Goldhofer SPMT and brought into the new facility to be assembled. The team utilized its Modular Lift Tower with strand jacks to make the lifts. On several of the asymmetrical pieces the CG was not centered between the lifting lugs so Barnhart utilized their extensive inventory of lifting devices to make rigging adjustments as needed on site.

Some larger pieces needed to be bolted together and assembled to a 0.1 mm tolerance using an assembly table made of Barnhart powered rollers and hydraulic jacks. The largest lift, the foundation crosshead, was assembled of seven components adding up to a final lift weight of 4,500,000 pounds.

In the end, the team made over 50 engineered critical lifts with very low ground bearing requirements and helped assemble one of the world’s largest presses.