Putting the Art in Barnhart

Barnhart has been hired for some unusual projects: to lift a 1950s garbage truck, install a generator on the roof of a high-rise, and set a lighthouse facade at a casino. In a recent job in Des Moines, Barnhart was instrumental in an art installation at Cowles Commons, a performing arts center. 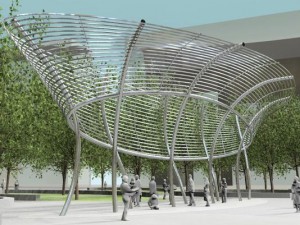 In early October, the team began installing a massive steel-and-light sculpture in the middle of the center. When completed, the piece will be 94 feet wide at its widest point and 28 feet tall, upheld by nine heavy-duty stainless steel columns.

Barnhart’s job was to lift and set the columns using a crane. Rigging operator Jon Fontana carefully lifted the nine curved steel columns out of a flatbed truck, over a chain-link fence, and down to their anchors in the gravel.

“It’s not your normal cup of tea for a crane operator, that’s for sure,” said Fontana. “This morning I woke up excited to do something different.”

The ellipses that spool around the columns will be built and installed over the next month by Denver company Demiurge. More than 10,000 LED lights will eventually be suspended in the columns and ellipses.