The project involved removing and strengthening the roof of an aging reduction oxidation facility. The roof area of the five story-facility was 90-ft-high, 388-ft-long and 64-ft-wide. 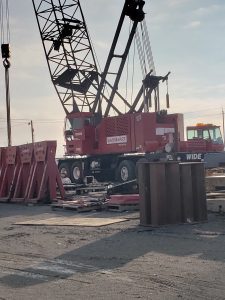 Barnhart was able to supply a crane that was capable of reaching both sides of the building from one location, which cut down on setup time. During the course of the project, Barnhart removed multiple layers of roofing including gravel insulation and rubber roofing.

Due to underground issues at the site, there were ground load bearing considerations. Barnhart was able to use some of their cool tools like bridge jumpers, which were able to span over low tolerance areas of the ground to safely move the crane around obstacles and minimize down time.

The strengthening of the roof involved adding a new structure that integrated into the existing roof that utilized pre-engineered building elements and customized them to act as a new roof structure.  Barnhart’s crane was able to speed up installation by preassembling some of the new structure on the ground minimizing installation time for the crew on the roof.

Being a Department of Energy (DOE) site in a desert location, there were other considerations. The crew wore body monitoring equipment to measure real-time heart rate and body core temperature as well as personnel badges to measure and monitor radiation dose.

Barnhart’s Richland, Washington branch headed up the project. “Probably the biggest challenge of this job was being able to construct and move the crane in a timely manner in a tight location and abide by all the requirements for a DOE nuclear site,” said Justen McCarthy, branch manager.