THE VALUE OF RECOGNITION

Recently, Barnhart made the Engineering News-Record’s list of Top 600 Specialty Contractors for 2013 ranked at number 45. That honor means it was a good year for Barnhart. Companies are ranked according to revenue from 2012.

That good news seems to be reflected across the industry. According to the ENR Report, “signs of a market turnaround are evident for many large firms. Revenues are up, and generally, markets are returning to health.”

We admit we love recognition and awards. Who doesn’t? But behind the accolades is plain, hard work, work that’s done well and safely.

For example, one of our biggest 2012 jobs took place at the Entergy Grand Gulf Nuclear Station in Port Gipson, Miss. a project that also won the SC&RA Rigging Job of the Year. 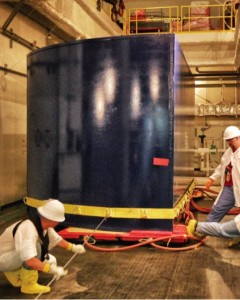 Barnhart prepares a containment box for removal at the Grand Gulf facility.

If there was ever a project that demanded high safety standards, it was this one. During outages at nuclear power plants many components are lifted, rigged and transported throughout the facility. This is a major concern to the Nuclear Regulatory Commission as the risk of damage to nuclear components is increased.

With that in mind, as an added measure of safety and third party review, the Grand Gulf facility contracted Barnhart to supply senior rigging supervisors on both shifts of refueling outages to monitor rigging practices, devices and personnel performance.

Every step of the way, safety was a concern. Work was conducted under stringent regulations because of radiological dose concerns. We established processes and strategic manpower rotation to limit radiation exposure to our crew.

Ultimately, the project was completed successfully, and more important, safely. And that’s of more value than any kind of recognition.