THE RED, WHITE AND BLUE (AND YELLOW) 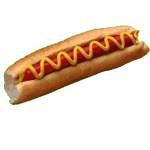 On this 4th of July, families across America will gather for a day of picnics and parties featuring hot dogs and hamburgers and amazing nighttime displays of fireworks.

Speaking of hotdogs, another lesser-known staple of 4th of July celebrations is the annual Nathan’s Hotdog Eating Contest.   The event officially started on July 4th, 1972 at Nathan’s Famous original restaurant in the Brooklyn neighborhood of Coney Island and has been attracting audiences ever since.

The contest is not just a lark.  The event is sanctioned by the International Federation of Competitive Eating (IFOCE).  Last year, nearly 40,000 spectators and an ESPN audience watched American Joey Chestnut win the “Mustard Belt” by eating 62 hotdogs in 10 minutes.  Sonya Thomas won the women’s competition with 40 hotdogs.  Each winner earned $20,000. Not a bad paycheck for 10 minutes worth of eating.

The rules of the contest are simple.  The field of contestants stand on a raised platform behind a 30-foot long table with drinks and Nathan’s Famous hot dogs in buns. Mustard and other condiments are allowed, but are usually not used. A designated scorekeeper is paired with each contestant. The IFOCE official flips a number board counting the hot dogs consumed. Partially eaten hot dogs count and hot dogs still in the mouth at the end of the 10 minutes count only if they are swallowed.

Barnhart Crane appreciates this unusual American tradition. We’re proud to be an American-owned company with offices all across our great country.  And this July 4th, we’ll be with our families celebrating our independence and eating our share of hot dogs too.   Only we’ll probably stop after one or two.