RISING TO THE OCCASION

For the first half of the NCAA Men’s Basketball Championship Monday night, it appeared an upset was in the making.  Michigan, the underdog, was outplaying the much-hyped Louisville, the team widely predicted to win.  Leading the charge for the Wolverines was a little-known, back-up freshman guard. 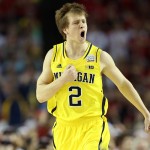 Spike Albrecht was not mentioned in any scouting report.  After all, he was a player who averaged only 1.5 points and 7.4 minutes per game during the regular season.  A player who spent the season in the shadow of starter guard and star Trey Burke.  But this back-up freshman came off the bench to score 17 points in the space of 11 minutes in the opening half, helping Michigan build a lead against Louisville that at one point was 12 points.

“The bigger the stage, the better he plays” his father Chuck said.

Spike Albrecht went in to the game when star Burke was benched early with two fouls.  Then he went on a scoring spree with a string of three pointers and a 30-foot shot that was nothing but net.  As an arena full of yellow-clad fans chanted “Spike, Spike, Spike!”  the 5’11 Albrecht zipped, zigged and zagged around the towering Louisville defenders.  At half time, his name was trending on Twitter.

Heady stuff for any player, much less a freshman.

But as everyone knows, the hot streak didn’t last.  Albrecht didn’t score at all in the second half. Trey Burke came off the bench and became the eventual high-scorer for the Wolverines with 24 points.  And most notably, Michigan lost to Louisville, 82-76.

However, our takeaway is that when given the opportunity to prove himself on a national stage, Spike Albrecht – like the T-shirts worn at times by both teams – “rose to the occasion”.  He took his 15 minutes of fame, or more accurately, 11, and did his best with them.  He showed what he was capable of.

In our more than 40 years in business, Barnhart has had many opportunities to rise to the occasion and show our capabilities.  While millions have never watched our achievements on the national stage, we were still pretty pleased with our recent award for the SC&RA Rigging Job of the Year which recognized our work replacing numerous major components at the Grand Gulf Nuclear Station in Port Gipson, Miss.

Thank you SC&RA for recognizing our hard work and good for you Spike Albrecht for giving it your best shot.

Meredith Portman is a freelance writer who specializes in heavy industry, healthcare and education.
View all posts by Meredith Portman →
This entry was posted in Awards, Power and tagged Barnhart, Michigan, NCAA Men's Basketball Championship, SCRA Job of the Year, Spike Albrecht. Bookmark the permalink.