Going into last Monday night’s BCS national championship game, the Alabama Crimson Tide were widely predicted to win.  But no one foresaw the Tide’s total domination and humiliation of Notre Dame in a lopsided 42-12 victory.  Since that night, much has been written about the football dynasty coach Nick Saban has built at the University of Alabama, a school already famous for its football dynasty under Bear Bryant. 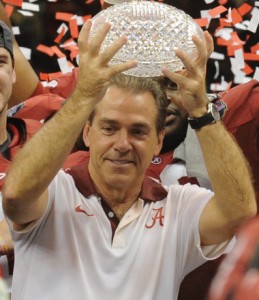 Can enough be said about Saban, the football genius who has won three of the past four national titles and four total in the past ten years?  How does he do it?

Part of Saban’s winning philosophy is known as “The Process”, or process focus.  The Process emphasizes concentrating on the steps to success rather than worrying about the end result.  So instead of focusing on winning and losing, Saban teaches his players to put their effort into those daily activities that cause success.

That means focusing on more reps in the weight room instead of the next game or   practicing with 100% intensity instead of thinking ahead about scoring that next touchdown.   It’s easier said than done, of course.  Focusing on the steps can be hard to maintain under the weight of expectations and anticipated results.

But Saban states: “Everybody wants to be a success. Not everybody is willing to do what they have to do to achieve it.”

Barnhart is also process focused.  In fact, it’s one of our company values.   We continually focus on and monitor our processes to ensure consistent excellence and an appropriate effort to meet the needs of our customers.

Barnhart has been awarded the Specialized Carriers and Rigging Association’s JOB of THE YEAR award 18 times which recognizes exceptional performance.  While we can’t directly compare our feats to those of the Crimson Tide, in our own arena that’s put us in a league of our own.

Meredith Portman is a freelance writer who specializes in heavy industry, healthcare and education.
View all posts by Meredith Portman →
This entry was posted in Awards and tagged Barnhart, Crimson Tide, Nick Saban, SCRA Job of the Year, University of Alabama. Bookmark the permalink.