WORLD’S LARGEST VIDEO DISPLAY GETS A LIFT FROM BARNHART

Barnhart frequently takes on mammoth undertakings, and occasionally encounters one of colossal proportions.

Barnhart’s assignment was to design the method and perform the installation of the world’s largest outdoor, permanent, four-sided center-hung television display.  Nicknamed Colossus, the display was to be installed at the Bristol Motor Speedway in Tennessee, a NASCAR short track and a popular sporting venue.

The Colossus is composed of four custom-built screens, each approximately 30 feet tall by 63 feet wide. The screens hang from a halo-shaped truss and cage, with an additional circular LED display screen underneath, measuring six feet high. 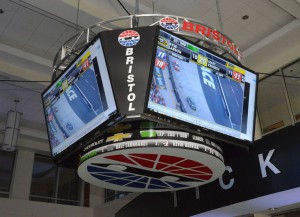 A mockup of the Colossus.

Barnhart’s engineers had to first figure out how to suspend the 3 1/2” diameter cables, similar to those used on suspension bridges, that would support the mammoth 380,000 lb. display. They erected four permanent towers, each approximately 200’ feet tall, at the corners of the stadium.

The issue of running cable from the towers to the Colossus structure proved to be the biggest challenge.  The team utilized a system of winches, crane blocks, and temporary messenger and pull cables to suspend the 3 ½” cables by lifting them, connecting one end of each cable to a tower, and then pulling opposing 3 ½” cables from the diagonal towers together.

The halo is lifted into place.

Once the cables were in place, Barnhart lifted the halo with two Manitowoc 999 cranes.  Barnhart personnel, working from man baskets lifted by smaller hydraulic cranes, connected the 3 ½” suspension cables to the halo pin connections.  The 999’s then lowered the halo so that it was fully supported by the suspension cables. 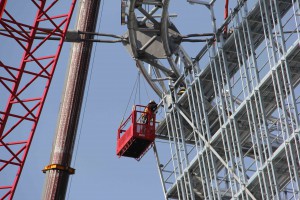 The Barnhart crew at work.

A couple of weeks later, the gondola, or TV cage, was lifted in place. Again, Barnhart utilized the Manitowoc cranes along with two additional 350-ton hydraulic cranes.

“This was a one-of-a-kind type job,” said James Harper, assistant branch manager of the Knoxville office, which handled the project. “The scale of the project, plus the intricacies of installing the suspension cabling, made it one of our more challenging projects.”

The Colossus will be unveiled this weekend at Bristol Motor Speedway.

Watch as the halo and gondola are lifted in these timelapse video.