Engineering News Record (ENR) recently named Alan Barnhart, owner and president of Barnhart Crane and Rigging, a “Top 25 Newsmaker” for his leadership of a company that successfully handled an extremely challenging project in Seattle last spring.

Barnhart  planned and executed the transporting, hoisting and assembling of the world’s 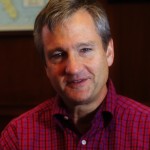 largest tunnel boring machine (TBM), designed to bore out the new Alaskan Way Viaduct. Nicknamed Bertha, the firm was charged with handling her 41 individual pieces—the largest weighing 850 tons—from a freighter docked at the Port of Seattle, 500 yards across port property and then 80 feet into the launch pit.

According to an article in ENR, Alan Barnhart knew that it would have been “absolutely catastrophic” if his crews damaged even one part of the 7,000-ton, 57.5-ft-diameter drill.

It was a touchy operation, but Barnhart Crane did it all without incident last May, and precision was the key. “It took a lot of work in pre-planning,” says Barnhart. “It was a major effort, and our engineering department put in thousands of hours.”

Individuals are chosen by Engineering News-Record editors who look through the stories that have appeared in ENR and select individuals for special recognition. There are no applications to review or interviews to schedule.  Editors select candidates because they made a difference for the industry and the public.

Barnhart, 53, has worked at the business his parents started in 1969 since he was 10 years old.   He and the other winners will be honored at ENR’s annual gala in New York City on April 3rd.