Barnhart Helps Kick Off the Holidays in Canton

Barnhart’s Canton, Ohio recently had an unusual assignment – moving a Christmas tree from its site to a location in downtown Central Plaza.

The 35-foot, 3,000-pound blue spruce was donated by St. Joseph’s Catholic Church, located just a few blocks away from the plaza. It was planted in 1991, according to Monsignor Frank Carfagna, and had outgrown its location.

Barnhart’s job was to provide equipment, a crane operator and two riggers. On the morning of the job, the 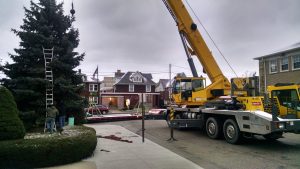 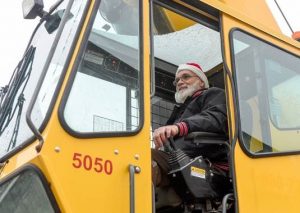 riggers rigged the tree, and a city worker cut through the trunk with a chain saw. Barnhart’s crane operator, Mark Shumaker, lifted the tree from its stump with a Grove 50-ton crane and expertly guided it to a double-drop trailer for the short trip.

At the site on the plaza, the tree was carefully placed by the crane into a receptacle on the ground. According to Shumaker, the biggest challenge with the job is one most of us face at Christmas, making sure the tree stands straight.

Unlike lifting a wind turbine blade at 300’ in the air or transporting a 317,000 lb. coker bubble tower, the tree was not among the most complicated projects Barnhart undertakes. But it certainly is one of the most fun, says Shumaker.  “It’s something you look forward to every year, being part of that community effort to bring the tree to the plaza.”

The Barnhart branch, which was formerly Selinsky Force, has been helping with the tree move, gratis, for approximately two decades. The tree was part of the Light Up Downtown event on Dec. 6, which kicked off the Christmas season in Canton.