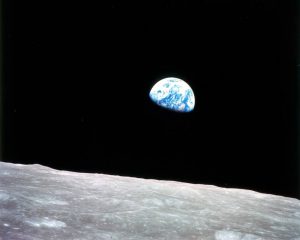 Posted on December 6, 2017 by Meredith Portman

To properly size and select a crane for a job many factors must be considered to determine the right type of crane and corresponding capacity. Should it be a heavy lift crane? Boom truck crane? Rough Terrain crane? Weight and size of load, location, reach, obstructions, and other factors must be determined before choosing crane.

Here are some key steps:

All these factors are essential to the process of selecting a crane for a safe and successful job.

Posted on November 20, 2017 by Meredith Portman

The facility acts as a response center for the SAFER (Strategic Alliance for Flex Emergency Response) program, storing $30 million of backup equipment for the nuclear industry in case of an emergency, including pumps, industrial grade fire hoses, generators, and lights that can illuminate five acres. This equipment would maintain safety functions for an indefinite period if an event disabled a plant’s installed safety systems. It has been preloaded on 46 trailers and, once deployed, can be at any nuclear facility in the United States within 24 hours. 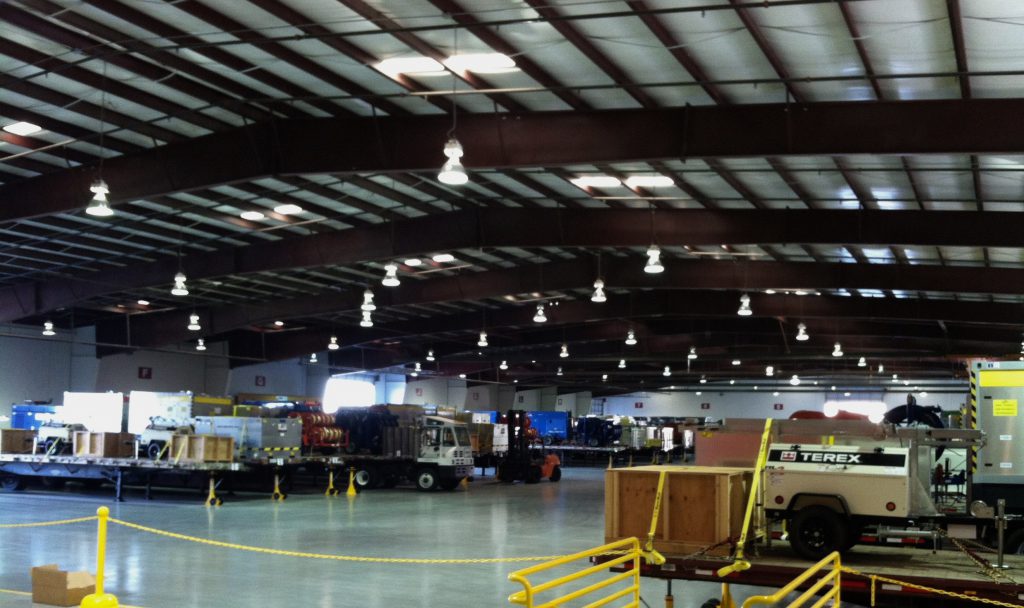 The Phoenix facility houses $30 million of emergency equipment for the nuclear industry.

Barnhart’s football-field size storage facility is climate-controlled and has been upgraded to nuclear storage standards. Three full-time employees maintain and test the equipment on a regular basis.

The site is so essential to the program, it attracts an assortment of distinguished visitors.  Senators, congressman, industry executives and top U.S. and Japanese nuclear regulators regularly tour the facility.

Barnhart has opened a second location in Kentucky with a new facility in Calvert City, joining Owensboro in the Bluegrass State.

“While we have been providing crane and rigging services and heavy transportation in the Calvert City area for many years, we can better serve customers in western Kentucky, southern Indiana and southern Illinois from this new operation,” said Clay Ellis, Barnhart’s branch manager for Owensboro. 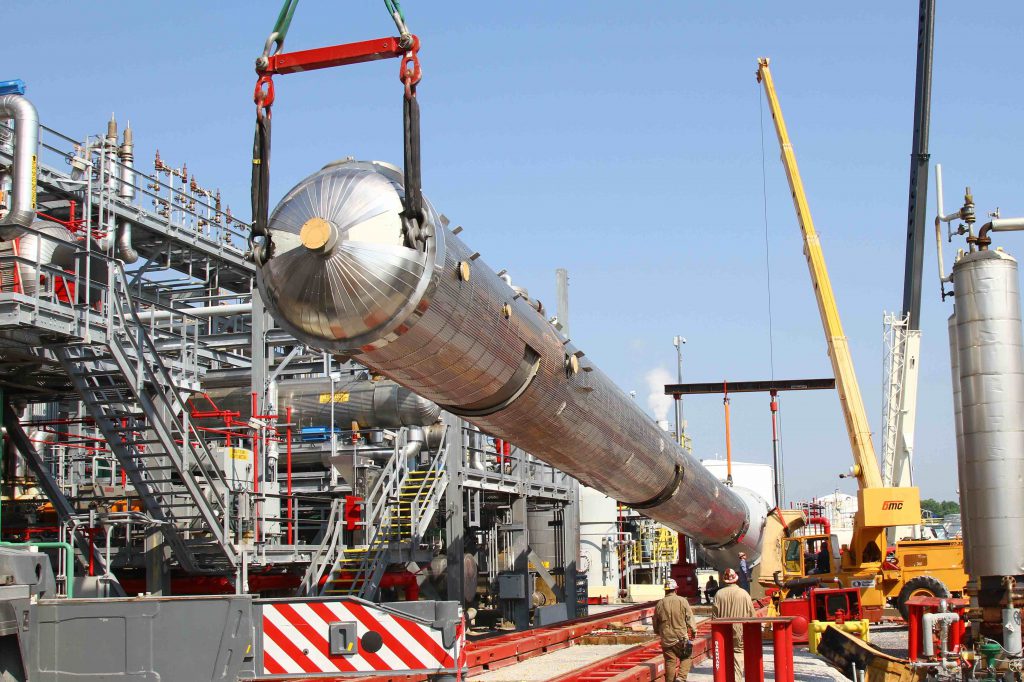 Barnhart offloads a deethanizer at a chemical plant in Kentucky.

The new branch will focus on providing service to the chemical and power industry.  Area customers will also have access to an inventory of local cranes ranging from a 60 to 600-ton capacity, as well as specialized rigging equipment like cantilever beams, gantries, slide systems, SPMT’s, and other larger project equipment.

In addition to Calvert City, Barnhart has more than 45 other branches nationwide, including locations in the region in Tennessee and Illinois.

Barnhart has been busy addressing critical infrastructure needs at waterways across the southeast. Their work on three lock and dam projects, including one featured in a blog last month, was recently profiled in Waterways Journal.

For a recent project in Kentucky that was featured in the article, Barnhart used traditional methods to replace a set of miter gates. The old gates were scrapped and the new gates were lifted from a transport barge and set using Barnhart’s adjustable rigging link system and a LR 1700 barge crane. No land side support was needed as all operations were self-contained to the barge and river. 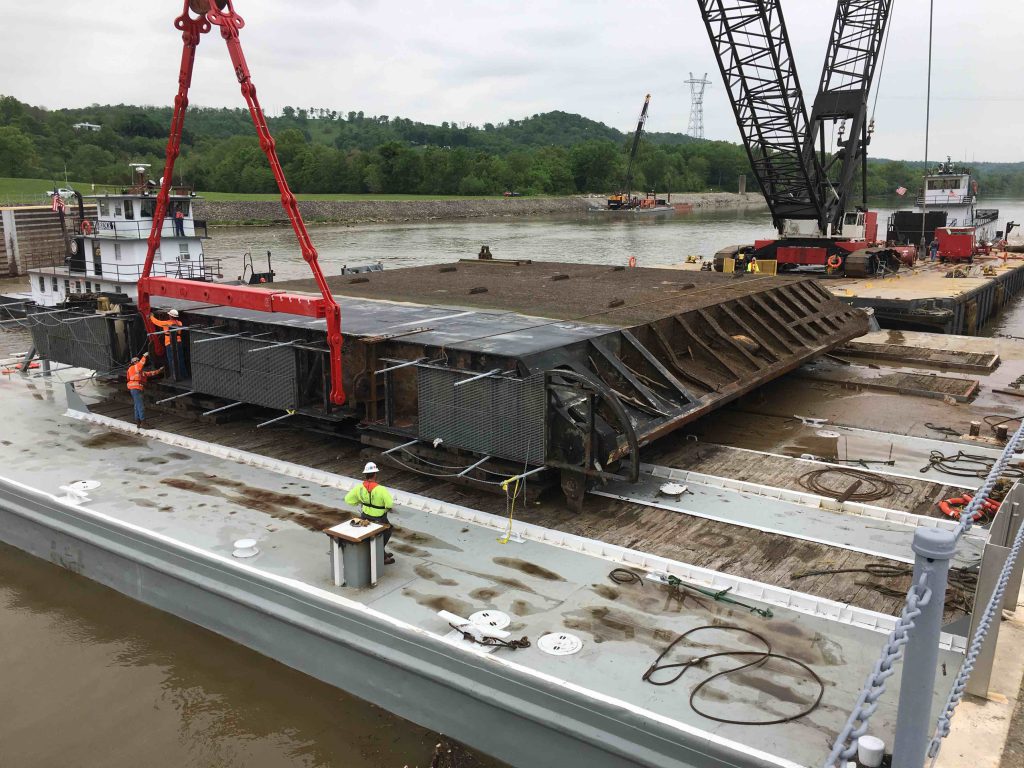 Barnhart uses a traditional method in this lock and dam project in Kentucky.

A separate project in Alabama used a nontraditional approach. The work was performed using a modular lift tower and a girder system, which spanned the 110’ width of the lock, in conjunction with a 500-ton hoist and slide system.

In the Waterways article, Jeff Latture, Barnhart’s senior vice president was quoted as saying that often project planners don’t consider nontraditional options because they are usually less familiar with those methods.

However, he urged consideration of this approach. “Depending upon the scope of the project, using nontraditional methods could be a safer option and provide lower overall costs.”

Posted on September 28, 2017 by Meredith Portman 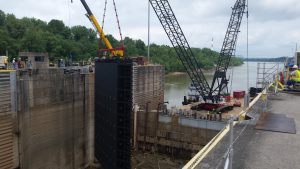 Posted on September 6, 2017 by Meredith Portman

A pulp and paper mill in Alabama needed to replace a 28’ long X 8’ diameter, 34,000 lb. deaerator. The unit was located just below the roofline of a 100’ tall building.

The traditional method of lifting the piece through an opening in the roof could not be done due to overhead piping that would not only be costly to remove, but would completely shut down production at the mill.  The deaerator would have to be accessed through a hole the customer cut in the side of the building.

It was a job for Barnhart’s movable counterweight system, but the reach of the beam in its normal configuration wasn’t long enough. Barnhart’s engineering team got involved to modify the system and add extensions to give it its necessary length. 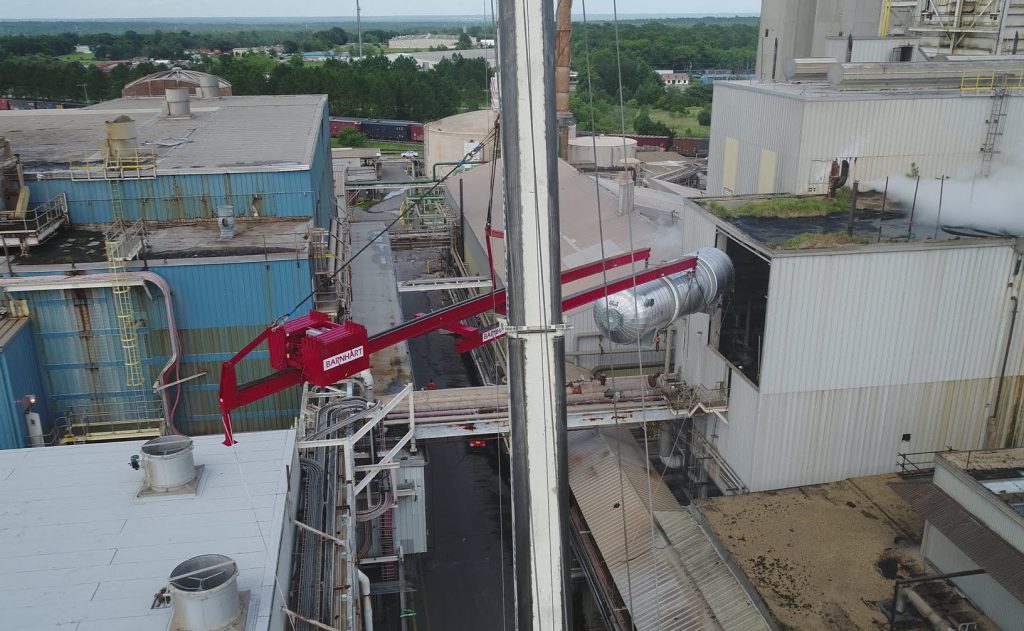 In addition to engineering challenges, there were tight clearances in the mill alleyway to set up a 600-ton hydraulic crane and assemble the system, plus just 7′ of overhead clearance above the unit. Still, the old unit was successfully removed and the new unit set to anchor bolts inside a building that was operational.  The job was completed a day ahead of schedule.

The lift allowed Barnhart to use one of their cool tools, a passing triangle that allowed the team to pass and share the load between the 650 and the 550 while the crawler tracked the other end into the final position. Barnhart’s engineering team was involved in initially suggesting the methodology and ultimately reviewing and signing off on it.

Here is a short time-lapse video highlighting the lift. 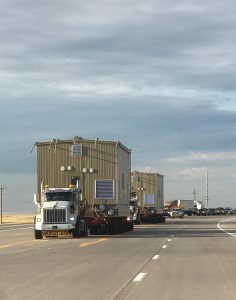 Now you can add a couple of superloads, which Barnhart was hired to transport from Colorado to Wyoming, a trip of over 550 miles. Each load contained a compressor generator building with a pre-installed diesel engine and compressor inside. While it wasn’t the biggest cargo Barnhart has ever hauled, the loads were 20 feet wide, 22 feet high, 140 feet long and weighed around 400,000 lbs.

The trip started at the manufacturers in Colorado where two Barnhart teams from Los Angeles and Memphis converged and loaded the cargo onto two separate 8-line Eastrac trailers. For the first few days, the convoy maintained a speed ranging from 2 ½ to 25 miles per hour as it passed through small towns and along two-lane highways. Barnhart had to coordinate with utilities and municipalities along the route to raise traffic signals and power lines, plus they had to negotiate a roundabout, which took 45 minutes to complete.

The haul attracted attention and made the local news in Wyoming, where Gregory Cross, Barnhart’s heavy haul supervisor was quoted as describing the loads as “…a backyard shed on steroids.” 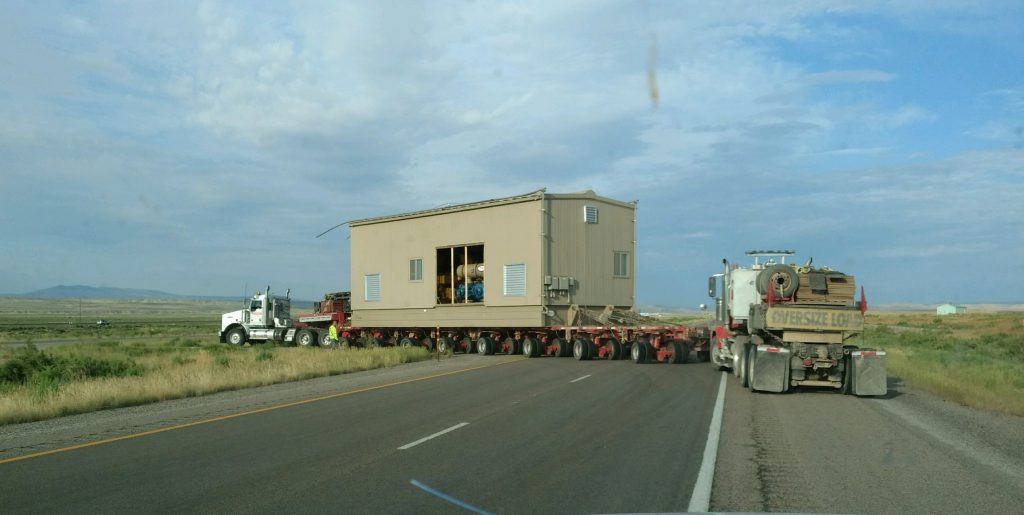 In Wyoming, the load was too high to clear an Interstate 80 overpass, so both Eastrac trailers had to do a U-turn on the interstate. It was a maneuver that required assistance from the Wyoming Highway Patrol and highway traffic teams as motorists on both sides of the interstate had to stop while the load completed its turn.

Barnhart continued its circuitous route to the final destination, a natural gas pumping station. The project was completed a day ahead of schedule.

Next week, people across the United States will be celebrating July 4th with fireworks, festivities and backyard barbecues galore. For most people, it’s a day off from work to celebrate America’s 241st birthday.

It’s also a chance to reflect upon what’s great about America. Among the many gifts our country gives us, we are grateful for opportunity, freedom, and the ability to succeed through hard work. 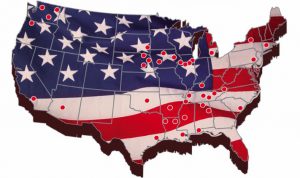 Our branches (red dots) from sea to shining sea.

Barnhart is a proudly American company. We were founded in 1969 in Memphis with a single location – a kitchen table. In the beginning, our current president Alan Barnhart’s parents started and ran the family business from their home.

Today, Barnhart has 45 branches and 1300 employees. Our employees come from all regions of the country. They are engineers, project managers, salespeople, crane operators, mechanics, ironworkers, and truck drivers, just to name a few roles that are indispensible to the success of our company.

Our employees represent all political persuasions, cultures and ethnicities. It’s a melting pot that works together to get the job done for our customers. It’s a picture of America.

This 4th of July we salute our employees and the country that has given us so much.